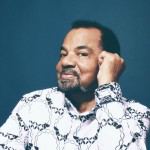 Born in 1942, in the city of Bengo in Angola, Bonga is a Semba. At the age of 23, before he began his musical career, he was Angola’s 400m record holder. At this time, he also joined Portugal’s Benfica football club.

For political reasons, Bonga was forced into exile. First, he took refuge in Netherlands. He recorded his debut album “Angola 72” in with the dutch label Morabeza.