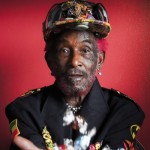 Born in Kendal, Jamaica, and died at Lucea’s Hospital, Jamaica. Lee ‘Scratch’ Perry was a Jamaican record producer, and singer noted for his innovative studio techniques and production style.

He began his career selling records for Clement ‘Coxsone‘ Dodd in the late 50’s. Then, he recorded about 30 songs for Studio One before leaving because of financial conflicts.

Before founding his own label Upsetters in 1968, he had recorded for Joe Gibbs‘s Amalgamated Records. His first major recording “People Funny Boy” was a diss song directed to Joe Gibbs.

Between 1968 and 1972, he recorded with his studio band The Upsetters, and produced various songs such as “Mr. Brown,” performed by The Wailers.

In 1973, he founded the Black Ark studio in his backyard. Until the Black Ark burned down in 1978, Lee Perry produced notable artists, and bands such as Bob Marley and the Wailers, Junior Byles, Junior Murvin, the Heptones, the Congos, and Max Romeo.