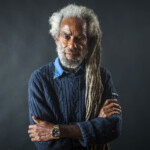 Born Maxwell Livingston Smith in 1947 in Jamaica, Max Romeo left school and his family at the age of 14, to pursue his passion for music. He recorded his first 7″ record in 1965.

After signing a contract with Bunny Lee, he rose to fame with the release of “Wet Dreams” in 1969.

Later on, he worked with producer Lee Perry and released hits such as “Macabee Version”, “Jordan River” or “Deacon Wife.”

Under the management of Island Records he released the albums: “Reconstruction” and “War Inna Babylon.”