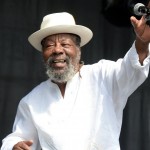 Born Ewart Beckford in Jonestown, Jamaica, U-Roy was a Jamaican deejay. He began his musical career in 1961 at Dickie Wong‘s Soundsystem Doctor Dickies.

Influenced by artists such as Count Matchuki and King Stitt, U-Roy popularized toasting as a new art form by dubbing Tubby‘s Hometown Hi-Fi.

U-Roy began recorded with John Holt on Duke Reid’s Treasure Isle label in the early 1970’s. His 1975 album “Dread In A Babylon” was a big success in the UK [1].

He was awarded the Order of Distinction by the Jamaican government in 2007 for his contribution to music.

Listen to U Roy

Read more about U Roy