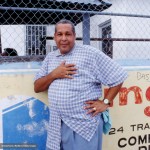 Lloyd James, who is better known as Prince Jammy or King Jammy, is a sound engineer and record producer. He began his musical career as a dub master at King Tubby’s recording studio. His dubs were known for their clear sound and use of effects.