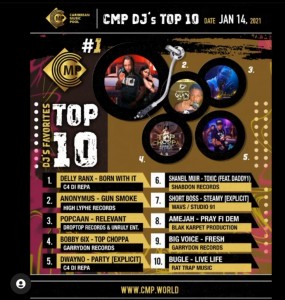 When you can deliver a flow and a style that is truly authentic then you have certainly found your space and niche. When you put time and effort into your craft then the possibilities are endless. When you think about the culture first, it’s always the way forward.
Well c4 Di Repa has done just that. He continues to deliver songs that shows his versatility and his hard work is paying off. He’s an full fledge artist. He’s a designer, singer, dancer and someone who just embodies entertainment.

Over the past eight years C4 has been knocking on door. He now focuses more on his writing and recording. His latest project which is called “Summer Wave” and its making its rounds. He is the producer of this compilation album which features the likes of “Delly Ranx” his track which is trending number one on the charts Born Wid It. Mr. Lexx , Rasta Bigz has a groovy song titled “VIBES”. Dwayno with “Party” and more stars.

c4 Di Repa has a part in also several of the tracks. In terms of actually being apart of the voicing and concept in these hits. He’s also building the empire to build up his peoples and see the culture work for all mankind. I would like to make this be  apart of a classic that will go down in history. So the aim was to get some artist going as well and secure the culture with having hitmakers like Mr. Lexx and Delly.

C4 has his own track with Lookalike the dancer and Terry K. The title Summer Wave has a dance has a song and moves. He has actually coined a Dance move and it’s in all the dance circuits from Boom Boom to Baba Dee, Supa Hype and everyone. Most Dancehall fans see this as one that will be around for a minute. What we would like you to do is go take a listen. Go see why the streets is raving and see why old to new is working together in making one of the best albums for the times.

We here at Jamworld will always appreciate the hard work that all artist and producers put in. More love and prosperity to all.