On April 15, VP Records unleashes Sizzla‘s Radical, a collection of rare and unreleased material during the 2014 Grammy nominated icon’s formative years. Radical unearths musical gems from the Xterminator label sessions between the early ’90s and ’00 that were produced by the late legendary Philip “Fatis” Burrell. Fattis helped forge some of Sizzla‘s best work to date, including his 1997 breakthrough album Praise Ye Jah that is widely considered one of the top conscious reggae albums of its time. — Tiffany Mea, With Love PR

Sizzla‘s April, 2014 album titled “Radical” comes with a unique vibe from the reggae and dancehall icon.  With the number of releases Sizzla puts out, it can be hard not to keep your eyes on him, but this album is sure to keep you listening for a minute. “Radical” is a compilation of X-terminator Records tunes that were recorded between 1992 and 2003.  With production from Kareem Burrell and the iconic and late Fatis Burrell, you know this album will be overflowing with the excellence of yesterday.  Quite a few of which I never had the chance to listen to.  With a classic Kalonji feel, this album is not to be slept on.

It begins in such a calm meditation with “Protect My Life” as Sizzla sends a lovely vibe to the world through sound.  The second tune, titled “Radical” like the album, starts up with a royal bassline and takes a minute to build up to when the drums and bass drop together.  Sizzla comes with nothing short of top notch lyrics on this tune.  Kalonji questions the listener in a motivational tune on “What’s Wrong With the Picture?“  Sizzla reminds you if you don’t do it right, then you’re a “Sad Mistake“ in the next tune on the album.

In an upful song with a happy vibe, the next tune Sizzla makes sure to “Bun Dem Schism”. Sizzla‘s flow is abundant in this next tune Hardcore on this simple beat I like to call “farm style”.  In the “Golden Rule“ the star humbly reminds us to “obtain Jah Knowledge, it’s the Golden Rule… A promise is a comfort to a fool”.   In “It’s A Rocky Road” Sizzla sings over a nice bassline with cuts of Barrington Levy in the background.  “

We were all born free and equal” starts the verse of the next tune “Everybody Has to Live” Kalonji tells us to give all the love we can give.  The horns start off the lover’s tune “Groove with Me”, as Sizzla declares his love over a great combination of instruments, including a high-pitched percussive organ and carefully placed guitar riffs, and a couple of psychedelic dub delay effects.  The lovers rock vibe is continued in the next tunes “That’s Why I Love You”, “All Da Time” and “Best Thing in My Life”.

The fourteenth tune, “I’m a Winner”, comes with a large sound showing you why Sizzla‘s a winner.  The piano and acoustic-guitar in “Fly High Fly Low” really is a perfect backdrop for an excellent showcase of Sizzla Kalonji‘s talent and reminds us why he is where he is today.  He finalizes the album with the tune “I Am No Better” where he humbly sings “…’cause I’m no better than you are, so what’s the difference. Jah create us all in this existence.”

Showcasing a profound collection of tunes, the album “Radical” is not to be missed. It is sure to be one of 2014’s greatest releases. The album is available for purchase, and streaming since April 11th on iTunes and April 15th on Amazon and other outlets. You may click here to preview it, or click here to buy it now. 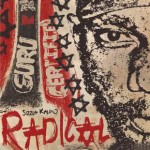