This Thursday, February 14th of 2019, King MAS releases “Crown,” his third studio album. An ecclectic album dedicated to love but not only.The album is introduced by a song titled “Round & Round.”  It starts with the sweet mesmerizing sound of kora, played by Djali Fily Cissokho. Then within a few seconds, the kora blends into a smooth Nu-Roots track. By the end of the track, Djali Fily Cissokho joins in again with his storytelling-style of chanting.

A myriad of romantic love songs

After a 2-minute interlude, reminiscent of early 2000’s R’n’B, the album takes a totally different turn. “Crown” includes a myriad of romantic love songs. However, it was highly expected that an album released on Valentine’s Day would include such songs.The very first love song is “Queen,” a Reggae/R’n’B love song, featuring Freddy McGregor‘s daughter Zosiah McGregor. It is followed by “Crown,” the eponymous track of the album, which is laid-back, and very tender Nu-Roots track, and “Di Sumn,” featuring D Major. Those songs are very romantic but might be the cup of tea of everyone.“Body Language” is yet another love song but it has a different flavor. It’s a little more uptempo than the previous tracks, and include a set of joyful horns. Unlike the other tracks, it tends to drive you to dance along. By far, it is the best Reggae love song of the album.

“No Lie” stands out from mainstream Dancehall

Another interesting track is “No Lie,” featuring Yellow Man‘s daughter K’reema. It is probably the best Dancehall track of the album. The combination of the grainy digital bass line and bright keys sounds very enticing. It is an original  track, which stands out from mainstream Dancehall that is currently being produced, like the following song “Crush.” It wouldn’t be excessive to say that “No Lie” is club-banger material!

“Flat Earth” is by far the best Reggae track from the album. It has a totally different vibe from the first part of the album. Not only because it is a ganja anthem but also because it is a deep Modern Roots track that contrasts with the previous lighthearted love songs.

“Because my ancestors never teach me about bad earth or flat earth,Them teach me how fi grow and how fi plant herbs.Go deh Mister herbsman, go pon a higher meditation.”

The mood gets darker

Towards the end of the album, King MAS displays a darker side in the Reggae Hip Hop track “Sorcery.” He sings about tribal traditions such as obeah/sorcery, and reaffirm his African heritage. Vocally, he hits lower keys and delivers obscure lyrics with a raw flow. This song is deeply visceral, almost as if King MAS was actually invoking the ancestral powers.

“Them think them sit down pon throne, yow, them kotch pon chairSay them a warrior me see it say them not sincereDem ah chat a bagga tingsInna dem heart dem fear The ancestral powersAh flow through locs and hair”

The medley “Definition of a King,” featuring Randy Valentine, and many more, includes synthesizers reminiscent of retro games theme. It’s not as deep and dark as “Sorcery.” Still it is a pretty dope track.Overall, “Crown” is a well produced album. Unfortunately, it is heavily love-oriented, which might not please everyone. Nevertheless, it includes various styles of track from Modern Roots reggae to Reggae Hip Hop including Dub/Stepper, and Dancehall. So everyone should fine a track that suits their taste. If you have never heard of King Mas before, and you like artists such as Chronixx, and Samory I, you will probably enjoy this voice. So I invite you to check out his latest album “Crown.”The album is available for purchase on digital outlets as of today. Do not hesitate to leave a comment below to let us know what’s your favorite track of the album. 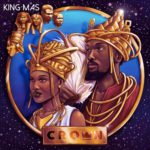