We were fortunate attend Lisa Hyper listening party kept at the famous Big Yaad studios before the release of her brand-new EP “Boss Up”.

Lisa Hyper has done what most find hard or impossible to do. She has done a complete 360 with image, sound and growth. It was a great night as the host Supa Hype entertained the crowd, and made the queen of the night glow.

The audience consisted of fellow artists, managers promoters and music heads. They interviewed Lisa about each song that was being played and articulately she answered right away.

It’s been a while since we had heard from the First Lady of Gaza for the last time. So, it was an agreeable encounter. To our surprise, Lisa explained each track, and the compliments came along with alcohol being poured.

Overall, it’s quite a great comeback story. The EP, which is titled “Boss Up” was released on September 1st, 2017. The EP includes six tracks that will allow you to appreciate the abilities and versatility of this female Dancehall star. There is a track there for everyone.

The EP is available for preview and purchase on digital outlets such as iTunes. Do not hesitate to check it out and let us know what you think about it by commenting below. 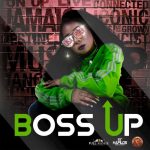