Shortly after releasing the “Islababad Riddim,” Digital B Records is back. This time they are bringing to you a brand-new EP by Reggae band Raging Fyah. Digital-B Records is at the origin of countless tracks recorded by legendary Reggae artists such as Shabba Ranks, Gregory Isaacs, Sizzla and Chronix just to name a few.

Those who might not be familiar with his name, probably remember better the names of a couple of riddims produced by Digital-B Records like the “Baba boom Riddim,” which has been remade by Mr G this year and released as the “Baba Bum Riddim,” “Cherry Oh Baby Riddim,” “College Rock Riddim” and many more.

Rekindle a flame of positivity in the music industry

“Boarding Pass” is a 3-track Roots Rock Reggae EP by Jamaican band Raging Fyah that “set out to rekindle a flame of positivity in the music industry”. In 2011, they released an album titled “Judgement Day”. If it is the first time that you listen to them, I assure you that you won’t be disappointed by this EP.

To begin with, the EP starts with the song “World A People”, also featured on the “Islababad Riddim”. Their version is slightly different from the rest of the riddim. A horn section has been added and at the end there’s even a saxophone. The way the vocals are mixed and the way the riddim ends on their version make the song sounds even more lively. In terms of content, the lyrics are quite simple and easy to remember.

“World a people, how are you feeling now? What a irie feeling that I’m feeling now.”

“Sunshine” is a sad Lovers Rock’s song, in which lead singer Kumar Bent relates the grieving he’s going through because of a heartbreak. On a different note, he demonstrates his vocal mastery  covering a wide range tones. The riddim has that old-school vibe brought by the horn section in the background.

Last but not least, the EP ends with a deep track entitled “It’s A Cold World”, in which Raging Fyah invites you to escape the system of babywrong.

Even though this song is about how cold is the world we’re living in, it is somehow warmed up by the sweet sound of the electric guitars and a cheerful bass. The delay effect adds a touch of melancholia, which is emphasized by the mellow tone of the choirs.

The artwork of the EP, which was designed by Jamaican illustrator Matthew McCarthy, is awesome as well and in the keeping with the Rastafarian culture. It represents a rastaman dressed in a khaki suit, smoking a joint with his hands forming the star of David and he’s got a boarding pass to go to Zion in his pocket. The cover is colorful and rather warm. It corresponds perfectly to the vibe of this EP, a collection of soothing Reggae music to hold a medi on the road to Zion.

If you haven’t heard the EP yet, I recommend you to take a listen. It is available for purchase on all major digital outlets. Support the music you like. Get your copy now. Share and comment if you like it. Raging Fyah is about to drop a brand-new album soon, watch out for this. 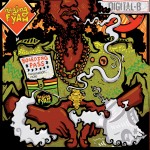