Young Veterans tried to rejuvenate the well renown “Playground Riddim,” produced in 1998 by Sean Paul‘s former road manager Jeremy Harding for 2Hard Records, with the release of the “Playfield Riddim.

Sheldon Pennicott & Ricardo Hard produced a version that is close to the original, and kind of conveys the same vibe. However, it doesn’t have that subtle late 90’s groove, even though it includes the characteristic samples of the “Playground Riddim.“

The bass of the 1997’s version is way deeper, and the riddim sounds much darker overall. In no way, the “Playfield Riddim,” could surpass the original.

The compilation features Elephant Man, Teflon, Harry Toddler, Mega Banton, and Merciless who also was on the 1997’s version, to name a few. 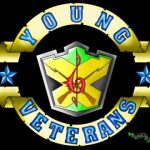