It’s an uptempo modern Dancehall riddim, which has a quite catchy bass line and skankin piano. Overall, it’s a decent riddim. Chan Dizzy‘s track is probably the best on this compilation. On a different note, “Hold Me” by Chris Martin is a quite nice club-oriented track.

Let us know about what you think about it. Also, do not hesitate to share it on social networks if you like it. 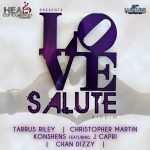