In my opinion, it’s one of the best Dancehall riddims of 2004. As soon as the intro begins, one can tell the riddim is going to be heavy. It includes big badman tunes like “Full Clip” by Mavado & Busy Signal.

You may find more riddims produced by Daseca here. Do not hesitate to leave a comment below to let us know what you think of this riddim. You can also share it on social networks if you like it. 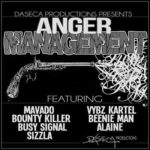