The “Bam Bam Riddim” is one of the most popular Dancehall compilation of the 90’s. You may not know it but you’ve surely heard it, whether you’re in Europe or Africa. The second you hear that guitar and that bouncy beat, you know you’ve heard it before. And you know when the dj plays that riddim in the club, everyone’s going to look for someone to wine with.

The most famous song on this riddim was probably “Murder She Wrote” performed by the duo Chaka Demus & Pliers. Even though this song didn’t reach the top 5 in the UK charts, such as “She Don’t Let Nobody” or “Twist & Shout”, it spread all over the world and seems to be timeless. On this compilation, Pliers also recorded a cover of “Bam Bam” made famous by Toots and the Maytals in 1966.

The “Bam Bam Riddim” had a huge impact on Dancehall music. This simple bouncy loop has been resampled and remade during the two past decades in various styles. One of the latest song referring to it, was “Badd” by Stylo G & Sister Nancy. It didn’t originate a whole new style of music like the “Dembow” which underpins almost every Reggaeton track but it definitely has influenced Dancehall and more generally caribbean music.

Here, I’m sharing with a couple of tracks off the “Bam Bam” produced by Courtney Cole & Barry O’Hare for Rooftop label. 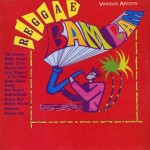