I love the style of Dancehall that was produced in the late 90’s/early 2000’s. They are minimalistic yet you can’t help moving to them because of the thumping drum beat and heavy bass line. Besides, the artists had to be much more creative as their voice was the prominent instrument in the riddim.

The “Bitter Blood Riddim”, produced by Wycliffe “Steely” Johnson & Cleveland “Clevie” Browne for Studio 2000, was released in 2000. It is a minimalistic riddims that features some an excellent line-up, and thus some great songs.

The compilation includes heavy tracks like “Cook” by Lexxus aka Mr Lexx, “Stay Far From Trouble” by Capleton, “Bitter Mi Blood” by Beenie Man, “Slap Trap” by Sean Paul and many more.

It is available for purchase on digital platforms. Do not hesitate to leave a comment below, and share it on social networks if you like it. 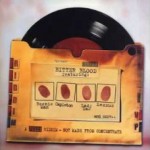