Godbless produced the “The Buff Riddim,” released on digital outlets on February 11th, 2014.

Like the “Rapid Burse Riddim,” it is not really a “brand-new” riddim.

For instance, some tunes like “Hey Roy” by Hawkeye, were released in 1997 as part as the “Braveheart Riddim” under Winston Riley‘s record label Techniques.

Do not hesitate to leave a comment below to let us know what you think of this riddim. You can also share it on social network if you like it. 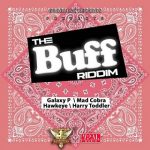