“The Buzz Riddim” was produced by Black Shadow in the beginning of the new millenium, in 2001.

This Dancehall Riddim brings back a lot of memories. Its unique and characteristic high-pitched guitar lead, so catchy, is undeniably unforgettable (Preview the riddim).

“The Buzz Riddim” is a must have. It’s available for purchase and streaming on digital platforms such as iTunes. You may click here to stream or buy it now.

Do not hesitate to share it and let us know what you think of the riddim, and what is your favorite song on it by commenting below. 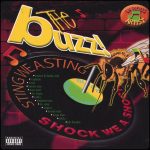