Despite the use of modern synthesizers, the riddim still sounds authentic. It is slightly reminiscent of the “Punning Riddim,“ produced by Steely and Clevie.

Most songs featured on the riddim are very good. Konshens did quite a good job covering the single “Don Dada,” made famous by Supercat in 1991.

Do not hesitate to leave a comment below to let us know what you think of this riddim. It is available on digital outlets for purchase and streaming. You can also share it on social networks if you like it. 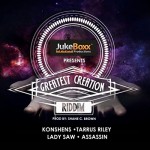