In 2006, Leftside & Esco produced the “Dem Time Deh Riddim” for the label Young Legends. This riddim, released as part as the “Riddim Driven Series,” is available for streaming, and purchase on digital stores. You may click here to preview the compilation or click here to buy it.

It also features club bangers such as “Ukku” by Aidonia, which is probably Aidonia‘s best song of 2006. 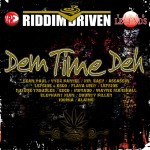