The “DUI (Dance Under The Influence) Riddim,” produced by CR2O3 Productions and featuring Beenie Man, Ding Dong, Konshens, Mavado and more. You may click here to view the full track list. 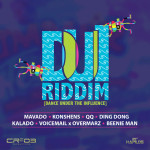