When think of riddims that had a significant impact on the Dancehall industry, we first think of riddims of the 80-90’s. Those have been remade over and over again during the last decades. Therefore, riddims like the “Answer”, “Bam Bam” and “Stalag” are now ranked as classics.

The 80’s are considered, by many, as the golden age. But if we take a closer look, a couple of riddims from the early 2000’s have made their way too. The “Diwali Riddim”, produced by Steven “Lenky” Marsden, and released as the 27th volume of the “Greensleeves Rhythm” series could be a classic too somehow. You may click here to view the full track list. The rididm is available for purchase, and streaming on digital outlets such as iTunes. You may click here to preview it or click here to buy it now.

First of all, its uptempo set of indian-flavored percussions and its deep bass line drive you crazy on the dancefloor. Secondly, if you look at the numbers, some of the tracks featured on the compilation did really well on the charts. Then last but not least, there are DJs who still play this riddim to get the people “shaking their thing” on the dance floor.

Songs off the “Diwali Riddim” that hit Billboard chart’s top

We took a look at the numbers Billboard‘s chart history, and below we listed the songs voiced on the “Diwali Riddim” that reached the top of the charts (Source: Billboard.com). You can also click here to view the track list below.

“Get Busy” by Sean Paul was the second single he released off his sophomore album “Dutty Rock” on 05/10/2003. Alongside the singles “Like Glue” and “Gimme The Light”, it propelled his career as a Dancehall artist to an international level.

This single remained on the top of the Billboard Charts for a little while and probably got some of you shaking “that thing” on the dance floor a while ago.

Two years later, a young barbadian female singer, rose to fame with the release of a single entitled “Pon De Replay”, featured on her debut album “Music of the Sun”.

The single ended up second on the Billboard charts. And now, Rihanna is one of the most popular R’n’B/Pop artists of her generation. So, once again, the “Diwali” contributed to the success of a caribbean artist.

During the summer, in 2003, Lumidee released the single “Never Leave You” (Uh Ooh, Uh Oooh!), which was voiced on a remake of the “Diwali Riddim” produced by DJ Tedsmooth & Trendsetta.

It reached the third position of the Billboard charts and it reminded the people of the sound of the “Diwali Riddim”.

“No Letting Go” by Wayne Wonder, off the album “No Holding Back,” was released only 3 weeks after “Get Busy”.

The track was a huge success. It peaked at the 11th position and remained in the charts for 31 weeks (32 for “Get Busy”). It was also a hit in the UK, as it peaked at the third place of the charts.

Other tracks that did will

A few other tracks off this compilation performed very well too, even though they didn’t peak in the top 20 Billboard’s chart.

For instance, “Elephant Message” by Elephant Man was the first track of the compilation to get airplay in the US (Billboard Magazine). “My Love Is Wicked” by Brick & Lace was a notable hit song too.

The “Diwali Riddim” is a great piece of Dancehall music. Besides, the numbers prove how well this riddim performed. In my opinion, it could be ranked as a classic Dancehall of the 2000’s. 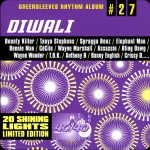