This riddim is in my top 5 of the 2005’s Greensleeves releases. This riddim is so hype and uptempo, you just can’t sit still when you hear it. The sound of the siren could have been annoying but somehow it is not. It adds some tension to the riddim. It includes some great tracks such as “Emergency” by Vybz Kartel and “Breakout”, which was featured on Sean Paul‘s third album “The Trinity”.

This is the 75th installment of a long series of various-artist albums. So, make sure you get it if you don’t have it in your collection yet. Let us know what you think of it. Also watch out for other releases. Do not hesitate to share it on social media if you like it. 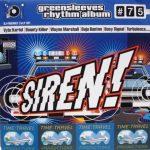