The 1994’s “Hot Milk Rididm,” produced by Robert ‘Bobby Digital’ Dixon for Digital-B, is a recut of the 1968’s riddim of the same name, produced by Jackie Mittoo.

Over the decades that followed the release of the original version, many producers have remade this riddim.

The most popular version of this riddim must be the 1984’s version produced by Hymn Wright & Percy Chin for Jah All Mighty. That  80’s version features the hit song “Murderer,” performed by Barrington Levy. Ever since the release of this song, some may refer ro this riddim as the “Murderer Riddim” as well.

So, do not hesitate to leave a comment below to let us know what you think of this riddim. Tell us what’s your favorite version of it. You may also share it on social networks if you like it. 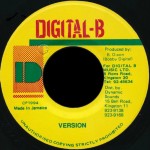