In 1992, Bobby Digital & Philipp Smart produced the “Hotter This Year” riddim for Tan-Yah.

Just to name a few, the riddim features “Day-O” by Frankie Paul, which is a cover of an old Jamaican folk song that has been largely popularized outside of the Caribbean by Harry Belafonte. 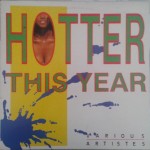