“Just Friends Riddim Driven,” produced by Winston Riley for The Techniques in 2001

“Just Friends” was produced by Winston Riley for the record label The Techniques, and released as part the “Riddim Driven Series” in 2001.

As a fan of Studio One‘s productions might notice, this riddim is a recut of “Mama Let Me Go” by the The Heptones. The original version of this riddim is also known as the “Love In The House Riddim” in reference to the song of Errol Dunkley, produced by Nkruma Jah Thomas for Midnight Rock (Source: Discogs).

If you closely pay attention to the bassline, and chord progression, one can also note the similarities this riddim shares with the “Love I Can Feel Riddim,” popularized by John Holt‘s song of the same name that was produced by Coxsone for Studio One in 1970 (Source: Riddimguide.com)

For the record, the VP Records’ “Riddim Driven” series includes more than a 100 riddims. It’s a must-have in your Reggae music collection. So make sure you get this issue if you don’t have it yet. Also, do not hesitate to leave a comment below to let us know what you think of this riddim. 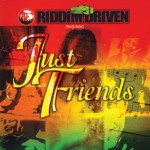