Digital B presents the “Leaving to Zion Riddim,” released in 1997

The “Leaving to Zion Riddim”  was produced by Digital B in 1997. It is a fresh and colorful Reggae riddim with a quite uptempo drum section. A subtle touch of dub delays, in addition to the lead synth keys loop make it sound quite hypnotic. On top of that, there’s a terrific guitar riff that reminds us of the true sound of early Roots Reggae.

The fans of Black Uhuru might have noticed that this riddim is not an original piece. Indeed, it is a remake of the 1979 Black Uhuru‘s single “Leaving To Zion.”

It includes “Hard Ground” by Sizzla, which was also featured on his third album “Black Woman & Child,” produced by Bobby Digital. On the riddim, Sizzla delivers a strong social commentary, chanting a catchy chorus:

“Hard ground, no sounds for the suffering, who collect the pounds to keep dem bound from uprising?”

“Feel the Pinch” by Lt Stitchie is pretty captivating too.

“All who nah feel the pinch a do the pinching, teeth a grind, them check say that me smiling.”

Do not hesitate to leave a comment below to let us know what you think of this riddim and/or share it on social networks. 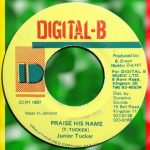