As you could imagine, the riddim is mostly made of a prominent piano layer. It is a blend between the tenderness of a delicately-played piano music and a soft laid-back caribbean beat.

Technically, there is not much to say about the production. Nevertheless, it is not the kind of riddim I like the most. It is way too soft, and lacks of dynamism.

Do not hesitate to leave a comment below to let us know what you think of this riddim. You can also share it on social networks.

It’s available for purchase on digital outlets. So, get your copy now. Support the artists and producers you like. 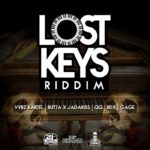