One could expect the “M-16 Riddim” to be a military-driven Dancehall riddim loaded with bad man tunes. If you thought so, then I am sorry to disappoint you. But it is likely one of the least ganster riddims that was ever released in 1999.

Even though Cutty Ranks does “murder some sound boys” on a special version of it, it’s a laid-back Reggae riddim.The “M-16 Riddim” is a laid-back and melodious Reggae riddim, which was produced by Boot Camp. It is a remake of the 1968 Rocksteady riddim of the track “Secretly”, produced by Lloyd ‘Matador’ Daley, and made famous by The Uniques.

Since 1968, a few producers released their own version of this riddim. This 1999 cut features various artists like the late Jimmy Riley, Capleton, Admiral Tibet, Nadine Sutherland and more. —See the track list below.— It sounds lovely. If you have never ever heard about it, give it a listen.

I hope you’ll enjoy this version. By the way, if you like it, do not hesitate to let us know. Just leave a comment below and/or share it with your friends on social networks. If you are not fond of it, you can also tell us which is your favorite “M-16” version. 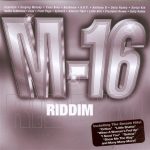