It also includes hit song “Clarks,” performed by Vybz Kartel with Popcaan, and Gaza Slim. You may click here to view the full track list.

Do not hesitate to leave a comment below to let us know what you think of this riddim. You may also share it on social networks if you like it. 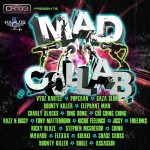