In 2004, Christopher Birch produced the “Military Riddim,” released under in label Birchill Records.

The riddim features artists such as Vybz Kartel, TOK, Beenie Man, Bounty Killa, Sean Paul, and many more. You may click here to view the full track list.

Like the “Stepz Riddim” released the same year, the riddim is based on a military march band rhythm pattern. Yet, it is not the same. From the first measures, you can tell it’s the “Military” by the characteristic melody of the synthetic horns.

The various-artist compilation is now available on digital platforms such as Apple music. You may click here to preview it or click here to buy it now.

Do not hesitate to leave a comment to let us know what you think of this riddim. Tell us which track is your favorite. You can also share it on social networks. 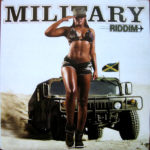