How Yuh Fi Sey Dat Music presents the “Move It Riddim,” released in 1993

The “Move It Riddim” is a various-artists Dancehall riddim that was produced by Redrose & Malvo for How Yuh Fi Sey Dat Music. For this riddim, Anthony “Redrose” Cameron collaborated with Sly Dunbar, who played the drum section.The riddim is well produced. Nevertheless, it sounds like a regular 90’s riddim, and doesn’t really stand out from other riddims of this era. It features Mad Cobra, Major Mackerel, Galaxy P., Snagga Puss, and Jigsy King.Unfortunately, the quality of the rip is of poor quality.If you’d like to hear more records from How Yuh Fi Sey Dat Music, you may find their discography on Discogs.Do not hesitate to leave a comment below to let us know what you think of this riddim. You can also share it on social networks if you like it. 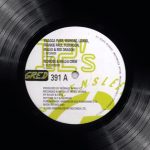