Penthouse Records unveils a remake of the classic dancehall compilation “Poco Man Jam Riddim.” The original riddim, released in the early 90’s, was produced by Steelie & Clevie. It featured artists like Cutty Ranks, Capleton and Shabba Ranks. The original “Poco Man Jam” has been relicked a couple of times since. For example songs like “Nuff Man A Dead” by Supercat and Shabba Ranks’ hit song “Trailer Load A Gal,” were released much later than the first version.

The new cuts are not as good as the ones off the 90’s version. Nevertheless, some artists like Assassin and General Degree delivered pretty good tracks. Unlike the original, which is a bit more bashment-oriented, this remake mostly features songs where the artists sings about their faith in God.

The riddim is available for streaming, and purchase on digital stores. You may click here to preview the compilation or click here to buy it. 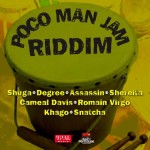