The “‘Invasion Riddim” and the “Maroon Riddim” were produced by Andrew ‘Black’ Prendergast & Josef ‘White’ Bogdanovich, for Down Sound Records in 2005. It is the third issue of the “Rhythm Streetz” series, distributed by In The Streetz.

The “Maroon Riddim” is a semi-acoustic nyahbinghi riddim, which features various artists including Luciano, Sizzle, Anthony B, and many more. It also includes the rasta anthem “Hail the King” by Fantan Mojah.

The artists cited previously are also featured on the “Invasion Riddim” alongside a couple other artists like George Nooks, DYCR, and Bascom X.

A recut of “Pressure & Slide Riddim”

This riddim is particularly recognizable thanks to its staccato horn section that introduces it, and comes in later as a bridge. Up until the 2000’s, many artists will voice it, such as Sugar Minot with the song “Oh Mr DC,” recorded in 1978.

This is the 3rd volume of the 10-album “Rhythm Streetz” series. So, make sure you get it if you don’t have it in your collection yet. Let us know what you think of it. Also watch out for other releases. Do not hesitate to share it on social media if you like it. 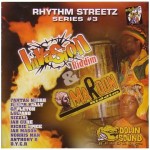