Let’s wrap up this weekend with a throwback. The “Riot Riddim,” produced by Jazzwad for Jazzwad & Jamdown Records, is a various-artist Dancehall compilation that was released in 1999.

It’s a Dancehall riddim with a prominent bass section that blends in with the drum kick. Like most riddims of the late 90’s era, the beat is bassy and minimalistic. It leaves plenty room for the artist’s vocals to spread through.

Every song is good and unique in its genre on this riddim. For instance, for the track “She Want It” by Sean Paul, the riddim has been customized. Unsurprisingly, Sizzla, Capleton and Bounty Killer delivered the best tracks on the riddim. You may click here to view the full track list.

The riddim is really mad. Its driven drum beat gets you bouncing along. So make sure you check it out if you haven’t heard it yet. Also, let us know what you think about it by commenting below. In case you have the full riddim, do not hesitate to contact us at contact@jamworld876.net. 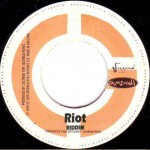