In 2002, Bobby Konders produced the “Tempo Riddim,” for Massive B.

It’s a pretty classic Dancehall riddim, which is a rejuvenated version of the 1985’s King Jammy‘s version. The very first song to have been recorded on this riddim is probably “Tempo” by Anthony Red Rose, released on King Jammy’s Firehouse label.

Do not hesitate to leave a comment below to let us know what you think of Massive B‘s version of this riddim. 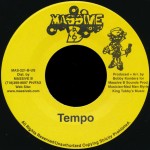