“The Flip” was produced by Louis ‘Flabba‘ Malcolm & Ricky ‘Mad Man‘ Myrie for the record label Mo Music, and released as part the “Riddim Driven Series” in 2002.

It is a very good Dancehall Riddim, which features artists such as Elephant Man, Mad Cobra, Sizzle, T.O.K., Kiprich, and more.

It also include “Concrete” by Sean Paul, which was also featured on his sophomore album “Dutty Rock,” and “Style” by Ward 21. “Style” is one of the best tracks of this riddim. 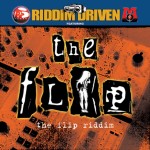