This #FlashbackFriday, check out the “Thugs Riddim,” produced by El Paso in 1999

This #FlashbackFriday, we invite you to check out the “Thugs Riddim” produced by E.J. Robinson for El Paso Productions. This Dancehall compilation that was released in the late 90’s, features tracks by Merciless & Future Troubles, Bennie Man, Sean Paul, Johnny P and Freddy Kruga.

The riddim itself sounds like no other, with some horns samples that give it a sort of comical touch.

Beenie had covered TLC‘s hit song “No Scrubs” released earlier in 99 too. “Enemy” by Sean Paul is one of the best cuts on this compilation. Besides, Johnny P delivers the sickest flow on the riddim.

Do not hesitate to leave a comment below to let us know what you think of this riddim. You can also share it on social networks if you like it. 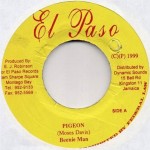