It’s a regular Dancehall riddim of the mid-2000’s, not to be mistaken with the 2nd Greensleeves Rhythm album “Virus” of the same name. I wouldn’t say it is a riddim that I particularly love. Though, it includes decent tracks by top-notch artists from back then.

If you would like to hear more of Shawn Scott‘s productions, you may check out the “Yard Step Riddim,” also released in 2006.

Do not hesitate to leave a comment below. Let us know what you think of this riddim. You can also share it on social networks if you like it. 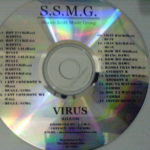