Reggae Dancehall singjay Wayne Marshall is about to unveil “Tru Colors” his first full-length album in over a decade. The 13 track LP produced mainly by Damian Marley and written almost entirely by Wayne Marshall will be the debut release for the Marley label Ghetto Youths International, following his digital-only EP of the same name —Tru Colors – EP – Wayne Marshall— release last year and his 2003 album “Marshall Law” released by VP Records.

Winner of the 5th edition of The Voice and Marshall’s sister-in-law, Tessannne Chin, contributed lyrics to the closing track of the LP titled “On The End”. The album features a few track in collaboration with other Reggae Dancehall artists such as Assassin a.k.a Agent Sasco, Capleton, Bounty Killer, Tarrus Riley and also popular US rappers like Wacka Flocka and Ace Hood.

The album is set to be released on January 21st, 2014 and will be distributed through Thirty Tigers / Sony Red. It will be available on all major digital outlets. You can pre-order it now on iTunes. 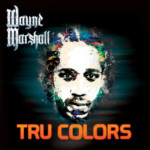