Mr. Vegas shows his support to the victims of hurricane Irma with a brand-new Dancehall track titled “Adios Irma.“ The song was voiced on the 1999 “Crash Riddim” that he co-produced with Byron Murray for the record label In The Streetz.

Simply by listening to the song in its entirety on Youtube or Spotify, you can support the caribbean of hurricane Irma.

In case you would like to give more, he also has started a fundraiser on Gofundme, aiming to collect 200,000 USD for the victims.

So I encourage you to watch the video on youtube. It only takes 2 minutes and a half. And, it doesn’t cost you a thing. Then you can leave a comment below to let us know what you think of this track. 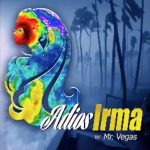