“Rude Boy Ting” is a brand-new Dancehall single performed by Aidonia on the “Pile Up Riddim”, produced by Yellow Moon Records. It is a gallis track, in which the Dancehall deejay shows off how easily he can seduce girls. “Get gal easy. Touch that quick. That a the thing. You know a rude boy thing.” It’s a pretty cheerful track with a light summer vibe. There is a radio-friendly version and a more explicit one. It is a track that would do fine in a club.  Do not hesitate to check it out. Share and comment if you like it. 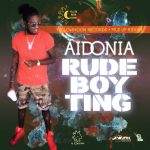