“Set Trend” is a Dancehall single featured on Yellow Moon Records‘s new “Pile Up Riddim”. It is performed by Mavado. This is not the first time that Yellow Moon and Mavado collaborate. A couple of years ago, Mavado dropped some heavy tracks such as “Clear D Way” on a re-edition of the “Wul Dem Riddim”.

This time the Jamaican sing jay delivers a more laid-back tune on the “Pile Up Riddim”.  To be honest with you, it sounds decent. But it is definitely not as aggressive and dynamic as the “Wul Dem”. It has a summery vibe. It seems that Yellow Moon is deploying a laid-back style to cool down the upcoming summer.

Check out this track and let us know what you think of it.

Listen to the track below. And also check “Rude Boy Ting” by Aidonia on the “Pile Up Riddim”. 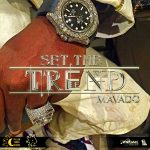