Check out the dancehall/rap crossover single “25” performed by Mavado featuring Chase Cross & Chipmunk and produced by Daseca. In this song the dancehall sing jay from Cassava Piece alongside young Jamaican deejay Chase Cross, and rapper Chipmunk express their concern of passing the age of 25 when living in the ghetto without ending up in jail.

This topic has already been covered in the past in a couple of rap songs such as “Pain” by Tupac “Running from my enemies will I live to be 23 / There’s so much pain” and “Gangsta’s Paradise” by Coolio “I’m 23 now, but will I live to see 24 / The way things are going I don’t know” just to name a few. 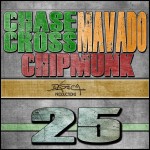