Recently, internationally renown Dancehall deejay Sean Paul has been quite active. He’s just been featured, alongside Vybz Kartel, on one of Konshens‘s latest singles.

The trio has voiced the single on a Modern Hip Hop-influenced Dancehall riddim characterized by a guitar riff syncopated with a simple beat mainly made of a bass kick and claps.

You may click here to preview the song now, and/or order it now on iTunes. Share it on social networks with your friends. Do not hesitate to leave a comment below.

Also watch out for more music by Konshens, Vybz Kartel and Sean Paul on social media: 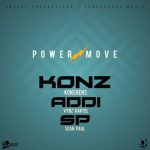