In 1967, The Gaylads covered “The Sound of Silence” originally written and performed by Simon and Garfunkel

The emergence of Rocksteady

After Jamaica gained its independence in 1962, the country embraced a cultural revolution. In the early 60’s, Ska music flourished extensively with the help of sound systems. Later on, Rocksteady grew out of Ska as a slowed down version of it. Even though, the Rocksteady era was short, you cannot deny its influence on the Reggae movement, which followed. “The Sound of Silence,” originally written and recorded by Simon & Garfunkel in 1964 was featured on their debut album.  It only rose to the number one position on the Billboard charts after the release of a remixed version in 1965.

The fusional harmonies of Simon & Garfunkel‘s soft voices, accompanied by a soothing acoustic guitar melody didn’t leave The Gaylads indifferent. You may click here to preview the original version.

The Studio One version

In 1967, Clement “Coxsone” Dodd produced a Rocksteady cover of this song recorded by The Gaylads & The Soul Vendors (Source: Whosampled.com).

The chord progression has been slightly modified to fit better Rocksteady style. An instrumental version dubbed by a horns ntroduces the song. After a little while, The Gaylads pick up the singing. You may click here to listen to the cover. 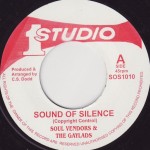 The Sound of Silence

Cover by The Gaylads & The Soul Vendors