“Everyday Is Christmas” by Vybz Kartel, produced by TJ Records

It seems like “everyday is Christmas”, for the fans of Vybz Kartel.  Even though he’s still behind the bars, plenty tracks from the Teacha are being released on a regular basis.

TJ Records has recorded a large amount of Vybz Kartel‘s work since he’s been incarcerated. The combination TJ/Vybz is quite solid and on the good way to continue. At least, until self-titled Worl’Boss is free again.

Do not hesitate to leave a comment below to let us know what you think of this track. You can also share it on social networks if you like it. 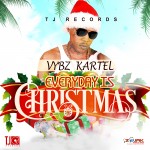