New singles by controversial Dancehall Deejay Vybz Kartel keep on flowing despite his incarceration. Adidjahiem Records has recently released another single by the artiste titled “The Supervisor”.

The song is rather smooth and laid-back on a riddim that somehow reminds me of the “4Play Riddim” produced by UIM Records, which features Bugle‘s hit song “Nuh Compatible”. Vybz Kartel sings:  “Jah know me concerned about yuh p*m p*m nuh wah yuh geet weh”…

The single is now available for purchase, and streaming on digital outlets such as iTunes. You may click here to preview it or click here to buy it now. 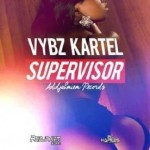