I particularly enjoy this riddim because it sounds very original. It’s mostly percussive and only includes a few leads. Besides, various tracks sound almost as if they were recorded on a totally different riddim because of small tweaks. Besides, it’s quite catchy.

This is the 52nd installment of a long series of various-artist albums. So, make sure you get it if you don’t have it in your collection yet. Let us know what you think of it. Also watch out for other releases. Do not hesitate to share it on social media if you like it. 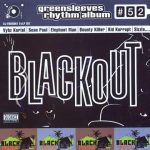